When Marvin arrived in Dnipro, Ukraine to start his studies in civil engineering in 2018, he felt like he was finally on the right track to fulfill his dream. “I was so, so happy,” he told DW. His mother cried tears of joy. “Because it was something that seemed impossible.” Growing up in Sierra Leone with little money, Marvin had saved for years and fought through a long and expensive visa process to get there.

This month, he was to graduate. But after war broke out in late February and shelling began in Dnipro, Marvin decided to flee. Now in Berlin, he feels stuck in limbo. While Ukrainian citizens are fast-tracked through the German immigration system, the situation for many third-country nationals who fled the war, including international students like Marvin, is more complicated. Most have only a few weeks left to apply for permission to stay in Germany.

Nigerian students Xavier (left) and Ikem are worried about the future

The number of international students without Ukrainian or European nationality who hope to continue their studies in Germany after fleeing the war in Ukraine is “in the order of a few thousand”, according to the German Rectors’ Conference (HRK), the association of German universities.

Calls are growing for this group to receive the same treatment as Ukrainian passport holders.

Thanks to a European directive, Ukrainian citizens who have fled to Germany have until August 31 to apply for a temporary residence permit, initially for two years, which allows them to work, study and receive social benefits. The same applies to “third-country nationals” married or in a long-term partnership with a Ukrainian citizen; persons recognized as refugees in Ukraine; or those who cannot safely return to their country of origin, especially people from Syria, Afghanistan or Eritrea.

Most others can only stay in Germany without a visa until the end of August. After that, they will have to apply for a regular residence permit.

“The German government seems deliberately to forget the fact that the war has not made a distinction between who is affected and who is not,” said Xavier, a 25-year-old Nigerian who was in the first semester of a law degree. in Kharkov.

Marvin views the different rules for non-Ukrainians as discriminatory, an extension of the racism he experienced while on the run. “I didn’t expect that, especially for a country like Germany, with its history. […] It’s really disappointing for a country that claims democracy and human rights for all.”

In an email to DW, the German Interior Ministry dismissed accusations of discrimination in its policy regarding third-country nationals who fled Ukraine, saying the different treatment followed EU requirements . 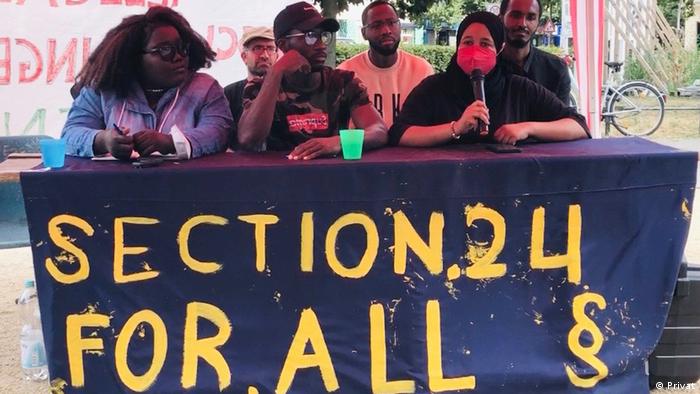 Difficult obstacles for a student visa

Students like Marvin and Xavier have the opportunity to apply for a student visa in Germany. But for that, they would first have to be accepted into a college course and show they have around 10,000 euros ($12,000) in a blocked bank account to show they can support themselves. Most university courses in Germany also require a good level of German. and a certificate to prove it.

“This means equal treatment for all third-country nationals who want to study in Germany,” the Home Office told DW.

But for many international students who have fled Ukraine, it is simply not possible to meet these requirements in such a short time.

Marvin has already applied to several German universities offering English-taught engineering courses. Although he is from Sierra Leone, where English is the official language, he had to pay €235 to take the IELTS English test as part of his application. But he fears her lack of savings could rule her out for a visa, even if it is accepted. He thinks the government should waive the requirement of an escrow account for people in his situation. “If it had been under normal circumstances. I would have understood. But now it’s not a normal circumstance. […] All my hope is to win a scholarship.”

The same goes for Christina (pseudonym), a 21-year-old Tanzanian aerospace engineering student who was studying in Kharkiv. “My parents had a small amount of money that they used to save for an affordable country like Ukraine, and Germany requires a blocked account,” she said, bursting into tears. “It’s very hard for me. I don’t know what I’m going to do.”

“No future” at home

Christina dreams of becoming an avionics engineer and eventually training as a pilot. She says her family, who have been saving around 5,000 Euro/USD over many years for her education, expect her to succeed. “I can’t go back with nothing. People expect a lot from me, so I can’t just leave and go back to Tanzania. I have to fight for what was lost.”

Twenty-year-old medical student Ikem said returning to Nigeria was not an option and the country was not safe. “A lot of ritual killings and a lot of kidnappings and a lot of crimes, it’s really difficult. If you take me now and put me back in Nigeria, I don’t know where I would be. There is no future of the everything.”

Ikem tried to continue his online course. But the situation is difficult. “Most of the time teachers miss classes because they have things to do. Some of them are sent to the front lines,” he said. “And then the university is still claiming funds, so we still have to pay for an uncertain future.”

Nigeria’s medical council has announced that it will not recognize medical degrees issued by Ukrainian universities from 2022, as many courses have moved online since the start of the war. Like Christina, Ikem is struggling to obtain the documents he would need to transfer elsewhere from his university in Vinnytsya, Ukraine. “They don’t want to lose a lot of students, so they’re withholding transcripts,” he told DW. 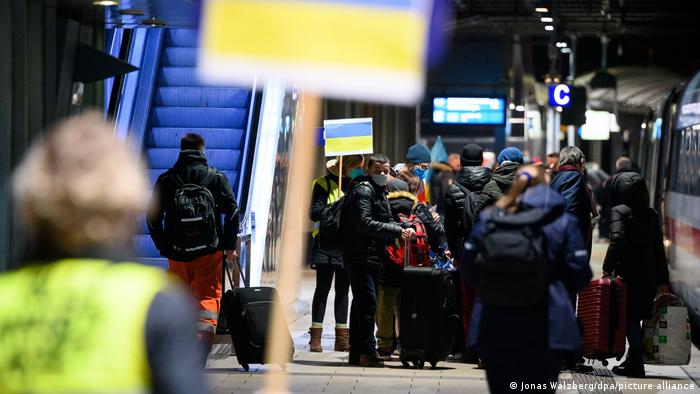 Many people of color said they faced discrimination fleeing Ukraine

Temporary permits in Hamburg and Bremen

Hamburg and Bremen are two German city-states that offer international students who have fled Ukraine a six-month temporary permit from the time they enroll in the city-states. This gives them some time to enroll in university courses here and start learning German. Some international students who fled Ukraine have moved to these cities from elsewhere in Germany, in order to take advantage of this opportunity.

But many also argue that six months is not enough time to start their lives over here. “You probably can’t get all the things you need in your life perfectly in six months,” says law student Xavier, who is staying in Berlin at the moment. “That’s why I’m also asking for two years, the same way everyone got it. The same way the Ukrainians got it.”

‘Just give me a chance’

Ikem is determined to finish his medical studies. “My goal is to help people […] and have an impact on the world. He says he will go wherever he has the chance to pursue his studies. “I just want to be a doctor. That’s what I want to be.”

Although this currently seems unlikely, all now hope that the government will expand the conditions for Ukrainian refugees to include third-country nationals like them – or that other cities in Germany will follow Hamburg and Bremen in giving them at least more of time. “If it hadn’t been for the war or the ongoing crisis in Ukraine, we wouldn’t be here,” Marvin told DW. “I’m not even interested in benefits. Just give me an opportunity and see what I can do on my own.”

While You’re Here: Every Tuesday, DW editors round up what’s happening in German politics and society. You can sign up for the weekly Berlin Briefing email newsletter here.